Help support the site by using our Amazon Affiliate link when making any purchases from Amazon.
Post Reply
292 posts

One area we are all overlooking is, due to covid it has really effected how many "friendly's" to test certain formations... I think Bielsa used this game as an opportunity to do just that... he would have learned a lot from it, especially the more senior members who were very poor at best...apart from KIko....gawd am I really saying that

My god Wolves really stitched us up, that hoof clearance near the end of the game finished me off.

FFS Leeds get rid of him

SG90 wrote: ↑Wed Sep 16, 2020 9:48 pm I blame Bielsa, because there was no need to make 11 changes. 2/3 max, yeah. Now we're undercooked for Saturday, Struijk and Koch need more games together. Rodrigo needs to link up with the team. What are we saving players for?

Fair questions, and maybe we'll get answers. Maybe not.

But my point still stands independently of these issues. If those players, that whole starting 11 (bar a couple), had shown more desire in defence and attack they wouldn't have conceded and would've scored. Team selection wouldn't have been an issue, subs wouldn't have been an issue. If we'd have seen 100% from them, then it would've all been tactical judgement, but it felt like 50% at most.
Last edited by mothbanquet on Wed Sep 16, 2020 10:00 pm, edited 1 time in total.
Top

Roberts was showboating in the first half when we’re we’re a goal down, trying flicks and back-heels and losing possession. His body language suggested he felt Leeds were playing against inferiors which tonight Hull were not. He looked like he didn’t feel to need to fully compete, and I’ve no doubt Bielsa will see that too.

I thought Bogusz got stuck in, but all the midfield 50/50s were falling to Hull.

Rodrigo chased hard a la Bamford up front, but had little influence overall.

Poveda was our most dangerous outlet but he’s too small yet and gets pushed off the ball too easily by bigger defenders - I think some porridge and weights are required.

All told, disappointing and confusing as to what was intended in equal measure.

faaip wrote: ↑Wed Sep 16, 2020 9:03 pm I think we can dispense with the MOTM, ratings and positive negative threads. I think they'll be divisive..

I think they'll be fun

Honestly, whenever we lose it's usually a forum break for a couple of days to let the emotion simmer down. I rarely get angry but I'm utterly livid about the performance, not necessarily the result.

Should probably go get some sleep.
Top

mothbanquet wrote: ↑Wed Sep 16, 2020 10:05 pm Honestly, whenever we lose it's usually a forum break for a couple of days to let the emotion simmer down. I rarely get angry but I'm utterly livid about the performance, not necessarily the result.

Should probably go get some sleep.

Good idea, that's me done it's been a long day

Aye same. SG, you know I love you.

Any Hull fans out there watching me meltdown, enjoy it while you can.

Still annoyed by the selection, the performance and the result. Can't see the point of it. Really wanted us to put a strong team out, and give the defence time to gel.

Unless Bielsa's got some very good reasons, that game was a real let down for the fans.
I may make you feel but I can't make you think
Top

Leeds manager Marcelo Bielsa: "It wasn't a very good game from our team, we didn't defend well or attack well. We would have liked to have continued in the competition, I am sad we were eliminated, I feel responsible for the defeat.

"The team was built with players that should have shown a better performance. The deficiencies in the team were because they couldn't gel together."

It’s obvious that he did think that the team selected was good enough to win. His summary is fairly damning - didn’t defend or attack well, before easing off with a “couldn’t gel together”.

This game may be a turning point for some players and possibly an accelerant for our transfer policy. Bielsa seems hurt by this and we could see players moving on, out on loans or sold. It’s clear that our dependable strength in the first team squad now is based on probably 17 players in total (holding faith with Alioski, Shackleton, Casilla and Poveda). That’s very thin. Quite simply we need quality additions. Most of those that played tonight are not good enough yet, or may never be.
Top

Boo Radley wrote: ↑Wed Sep 16, 2020 11:20 pm "The team was built with players that should have shown a better performance. The deficiencies in the team were because they couldn't gel together."

That's definitely a big part. Worth reiterating that most players didn't get a preseason and our U-23's have had one game - which none of these players played in.


Boo Radley wrote: ↑Wed Sep 16, 2020 11:20 pm "The team was built with players that should have shown a better performance. The deficiencies in the team were because they couldn't gel together."

This game may be a turning point for some players and possibly an accelerant for our transfer policy. Bielsa seems hurt by this and we could see players moving on, out on loans or sold.

It will be interesting. Not having a cup competition might result in a few more players going out on loan. What to do with the likes of Gotts and Bogusz now
We've been through it all together. And we've had our ups and downs
Top

Chilli D wrote: ↑Wed Sep 16, 2020 7:54 pm As faaip alluded, the youngsters will hardly have played since March and as such it was a big mistake to throw so many in, even if it is only Hull.
With 8 league less to play this season we should be looking for a cup run.
Still time to turn it around but a defeat will be embarrassing.

Alioski, Roberts, Rodrigo, Shackleton, Poveda, Douglas if any of those had been picked to play against Liverpool nothing would have been said. The youngsters in defence, okay you can expect a mistake or two but NO shots in the first half, second half 2 shots on target.

Wilks made Rodrigo look like a non league player, Coyle was many Hull fans mom both looked streets ahead of 10 of our players, Poveda stood out as at least trying. It wasn’t acceptable and I fear for Rodrigo if he can’t look better than that against a newly put together Hull team
Top

Agree with that Richard especially on Rodrigo, I just have a nagging feeling that he will be a flop

60sUnited wrote: ↑Thu Sep 17, 2020 7:38 am Agree with that Richard especially on Rodrigo, I just have a nagging feeling that he will be a flop

I really don’t think that will be the case, and it would be very harsh to come to that conclusion because of last nights game. When a team is weak and failing all over, there is nowhere worse to be playing if you want to influence a game that at 9. Messi would have struggled there last night.
Top

As I said when I saw the team sheet we weren’t taking this game seriously and as such we got the result we deserved. It’s not the defeat that is the problem it is the manner of the defeat.

Unfortunately, I was unable to watch the game but I did listen to the commentary and have read the comments on here. From what I heard and what has been said it is obvious that, even if our young fringe players have the talent (not so sure now) they may not have the right mentality or attitude to play at the top level. There is no excuse for not trying your very best and giving your all in every game and by the sounds of it, a lot of our players were guilty of doing just that.
Top

Has anyone else on here actually followed the Haribo cup over the last few seasons? The big boys, with massive squads and the funds to keep massive squads and compete on several fronts, play their fringe players until it gets to the sharp and then, more times than not, throw the big hitters in for the semi/final. The idea that we've thrown away the chance of silverware is laughable, imo. Yes, the performance was poor and some 1st team squad players disappointing, but with 11 changes to the team that started on Saturday, I thought it was always likely to be a struggle. Last season, our focus was on getting to the Prem. This season has to be about staying there. With a small squad, something Bielsa likes and wants, then cups invariably have to be sacrificed. That's just the way it is. I'm always disappointed when we lose, and it seems we were particularly poor last night, but cups are not a priority. If we can become an established Prem side again with a squad that reflects that, then yes, let's have a tilt at the cups but until then, we have to pick our battles.

I do agree with the majority that this has highlighted the need for a little more quality in certain positions in the 1st team squad, but as some pointed out, we might be forced to play one or two of last night's team due to injury, suspension or loss of form, but it would take something catastrophic to have to include five or six of them. As such, we shouldn't be too concerned. A bad night for our second string, but no need to reach for the blue rope just yet.
"When the going gets weird, the weird get professional!" Hunter S Thompson
Top

living in a fishbowl 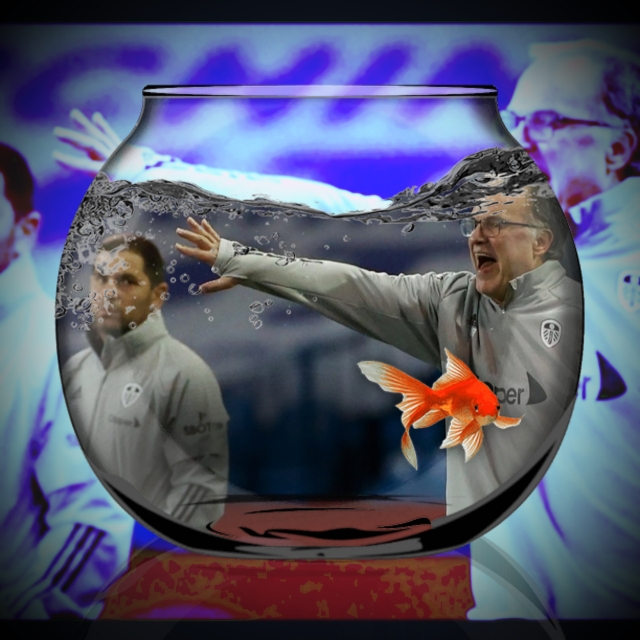